Named after the Welsh patron saint of lovers, St Dwynwen’s Day has grown in popularity in recent years — with lovers across Wales exchanging cards, gifts and affections on 25 January.

Though linked with Wales’s most romantic day of the year, Saint Dwynwen herself, sadly, wasn’t very lucky in love. Forbidden to marry the man she loved, she fled to Llanddwyn Island to become a nun and spent the rest of her life there.

Her influence to promote the happiness of lovers is believed to have endured long after her death — Llanddwyn Island continues to be a popular pilgrimage destination even today.

Welsh history is full of stories like this one, so to celebrate Dydd Santes Dwynwen we’re shining a light on the tales behind seven of Wales’s most romantic listed buildings — some of which have happier endings than others…

An apt place to start: the 16th-century ruins of the church dedicated to Saint Dwynwen.

Saint Dwynwen spent most of her life on Llanddwyn — a tiny island off the coast of Anglesey. For centuries, people from all over Britain have travelled there to seek help with romance and visit the site of Dwynwen’s holy well.

Pilgrims believed that matters of the heart could be divined through the movement of sacred eels in the well. The person seeking advice would lay their handkerchief on the surface of the water and a local wise woman would interpret the eels’ reaction.

Recognised as a Grade II listed building in: February 1952 (amended by Cadw in October 1998) 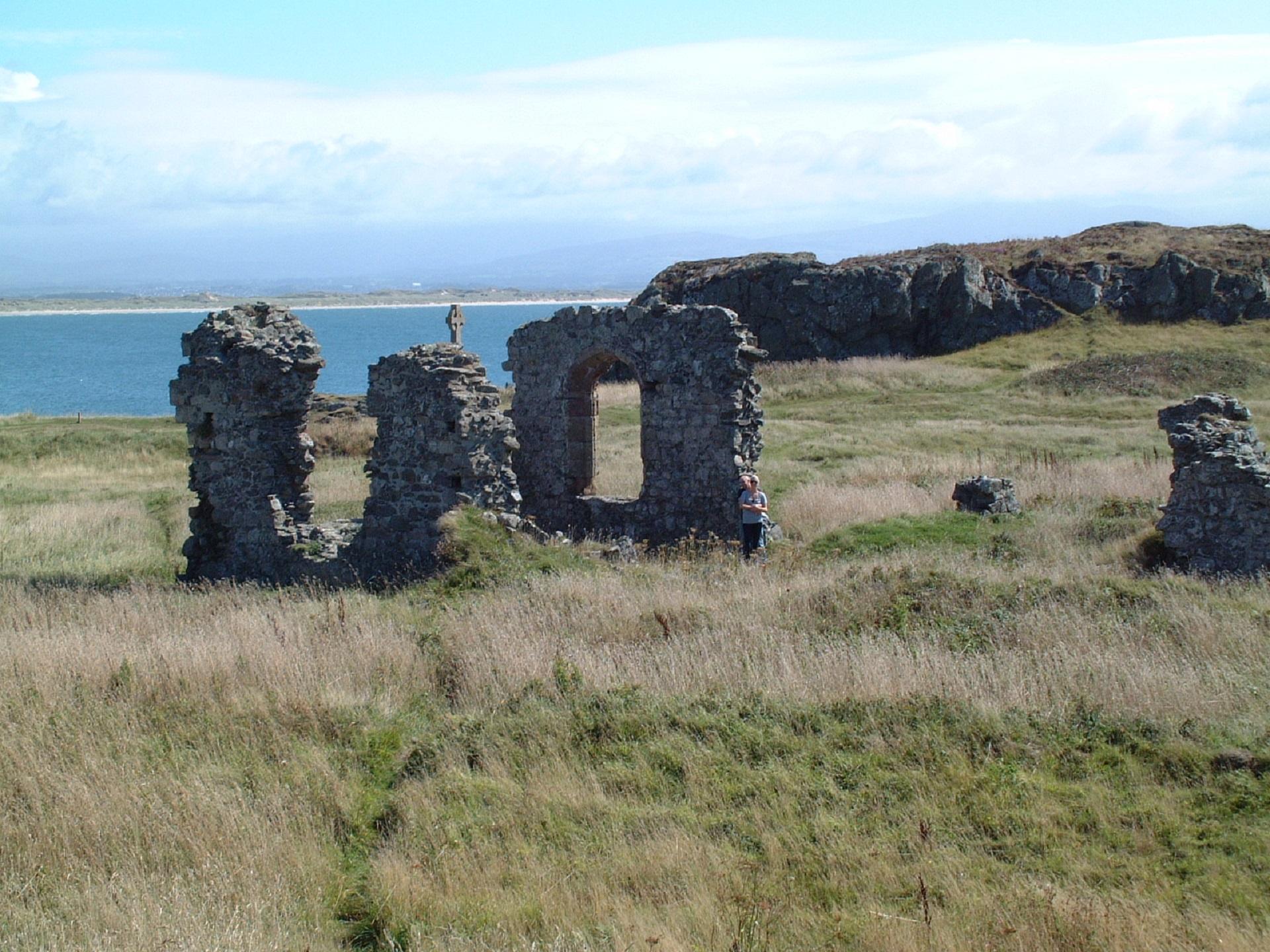 Not everyone in medieval Wales could travel to Dwynwen’s island for help with finding a partner, so people often turned to their local saints for help — especially to those associated with a holy well such as this one.

A dispute in Ireland forced St Cybi — a Cornish saint — and his acolytes to relocate in Gwynedd, where the well began to be identified with him. Its waters were considered beneficial for the treatment of eye problems, skin diseases and rheumatism — as well as matters of the heart.

As part of Gŵyl Mabsant, an annual Welsh festival held in commemoration of the patron saint of a parish, people would visit the now Grade I listed well to ask questions about their romantic relationships, before placing a feather on the surface of the holy water. The movement of the floating feather was then interpreted to give an answer.

Recognised as a Grade I listed building in: October 1971 (amended by Cadw in March 1999) 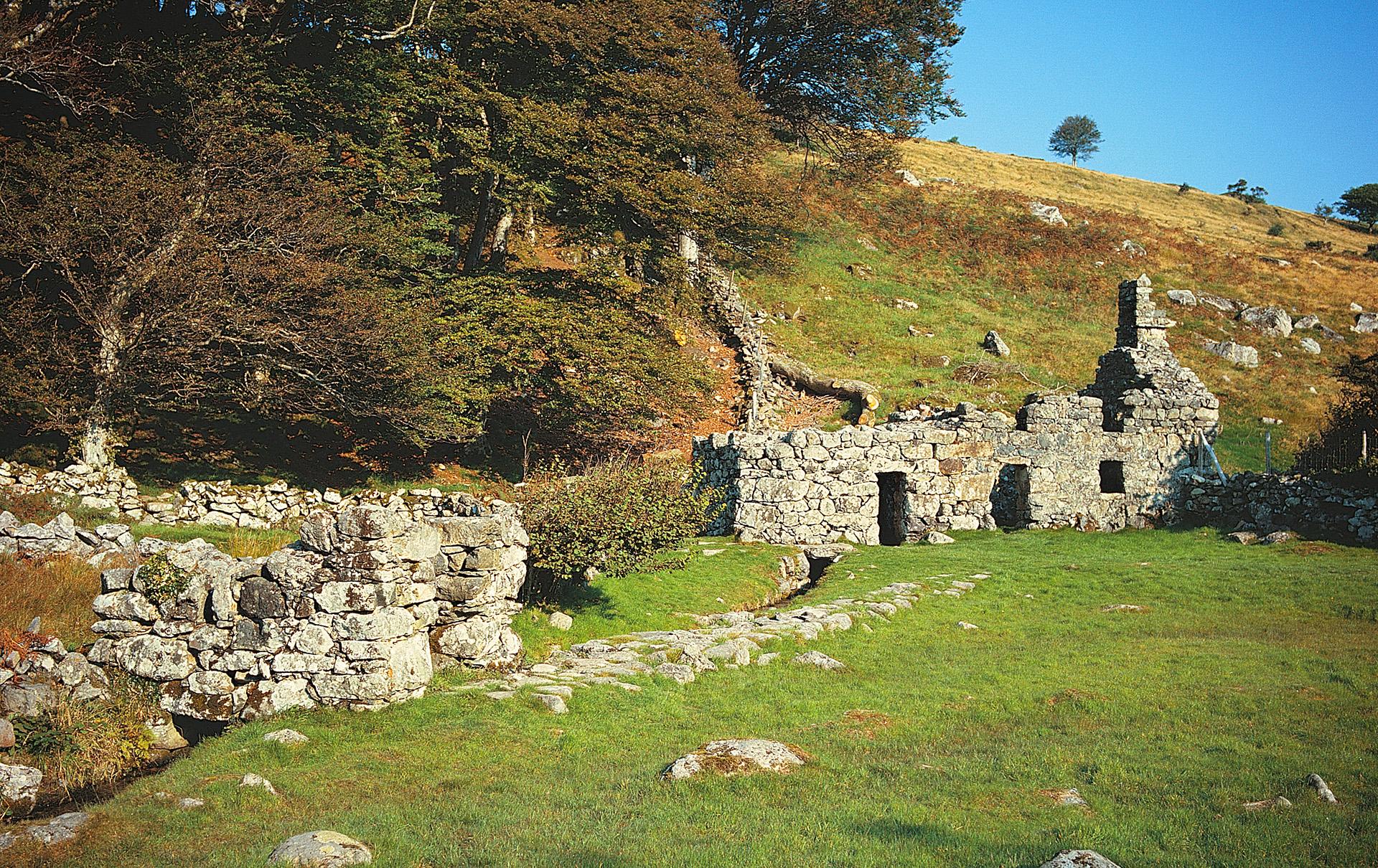 Another holy well, Ffynnon Fair (or St Mary’s Well) can be found next to the medieval chapel ruins on the banks of River Elwy, in Denbighshire.

In the early 17th-century, the chapel played host to various clandestine weddings, most famously those of sisters Catrin, Elizabeth and Marie Lloyd, who all tied the knot in secret between 1615 and 1633.

Even with the chapel in ruins by the 18th-century, the site remains still served as inspiration for romantics, with poet, Felicia Hemans, going so far as to pen her very own tribute to Ffynnon Fair, entitled Our Lady’s Well.

Recognised as a Grade II* listed building by Cadw in: June 1998 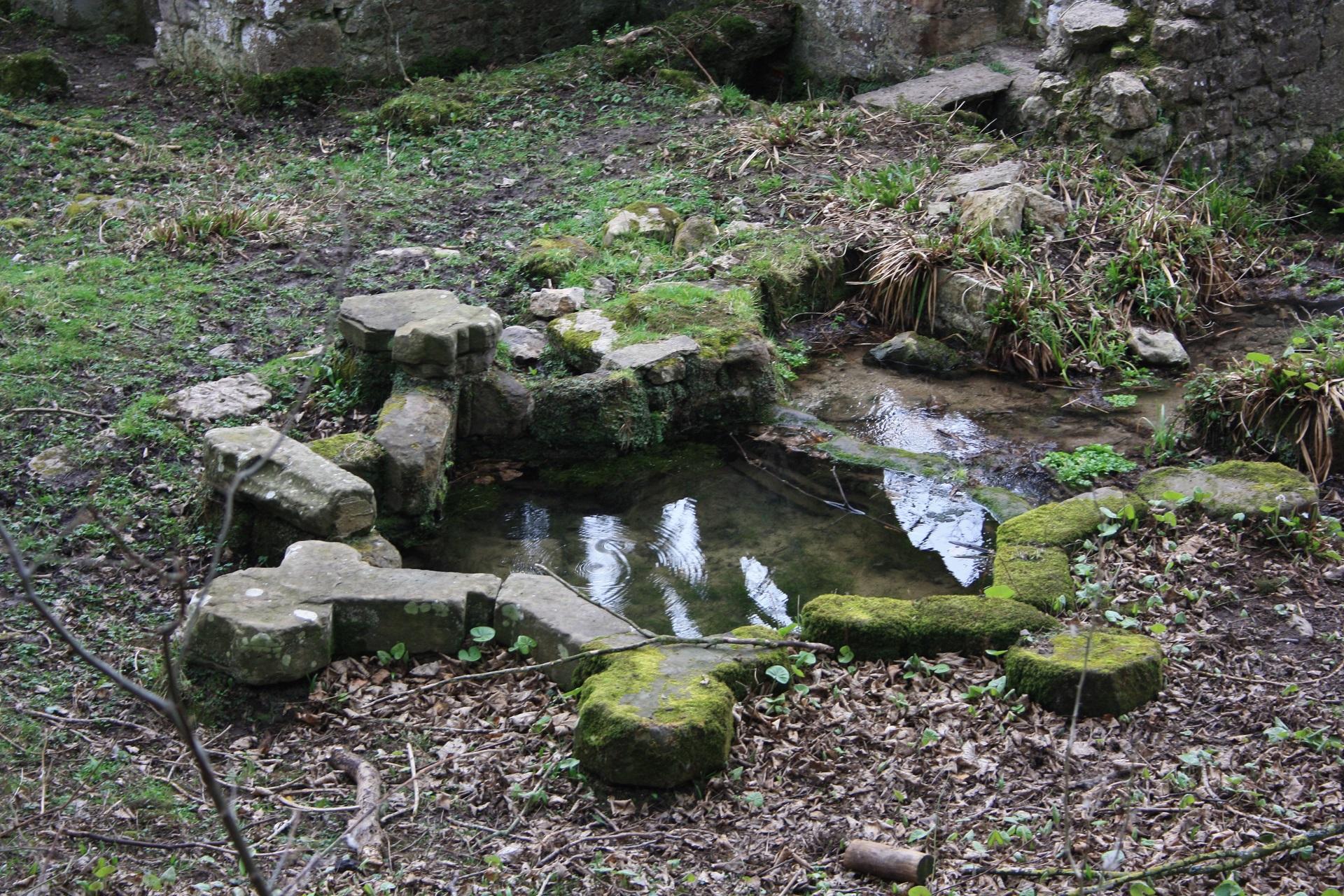 Maen-Du and St Anthony’s differ to our other listed wells, because they required people to bring an otherwise ordinary household item with them — a pin — in exchange for some luck in love.

Although this tradition was first recorded in the 1700s, the powers of the Maen-Du Well became so famous that women continued to drop pins there well into the 20th-century.

Maen-Du Well: recognised as a Grade II listed building in: December 1976 (amended by Cadw in November 2005) 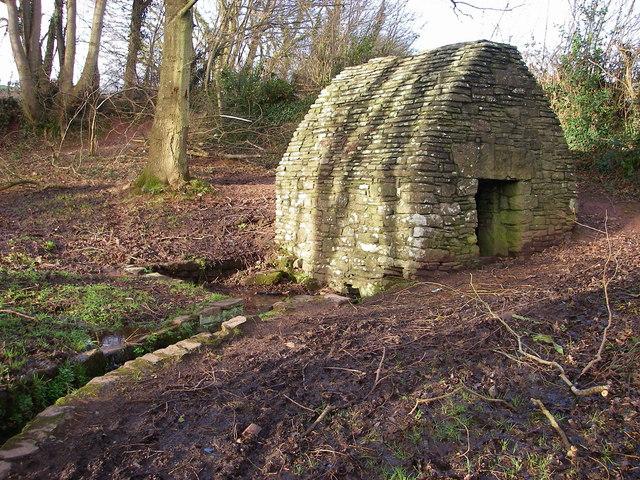 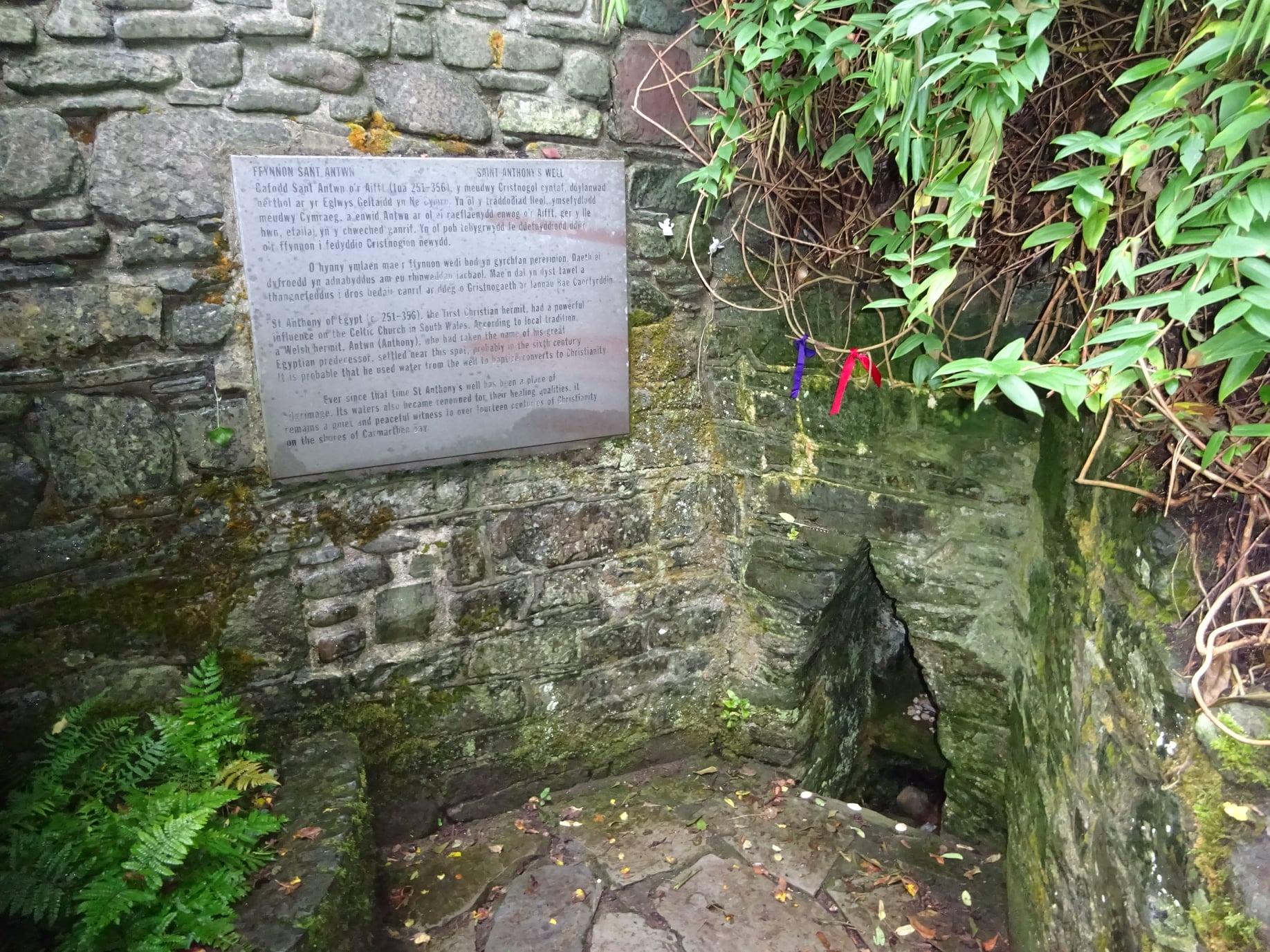 When it comes to tragic love stories, the first two names that spring to mind are Romeo and Juliet — but what about Will and Ann?

Swapping a balcony in Verona for a basement in Bridgend, this modest farmhouse on the north-east slope of Mynydd Baiden played host to one of the most tragic Welsh love stories of the 1700s: that of heiress, Ann Thomas, and local poet-come-plasterer, Will Hopcyn.

Despite having already fallen head over heels for Will, Ann was pressured into marrying local lawyer, Anthony Maddocks Jnr. Wanting to put an end to his wife’s affair with Will, Maddocks Jnr cruelly imprisoned Ann in the house basement — leaving her with no other option but to smuggle love letters to Will on sycamore leaves.

Sadly, Ann died of a broken heart aged just 23. Her death prompted Hopcyn to write a love song, Bugeilio’r Gwenith Gwyn, with their romance also immortalised in a novel, film, opera and a listed memorial — the Hopcyn Cross in Llangynwyd.

Recognised as a Grade II listed building by Cadw in: October 1998 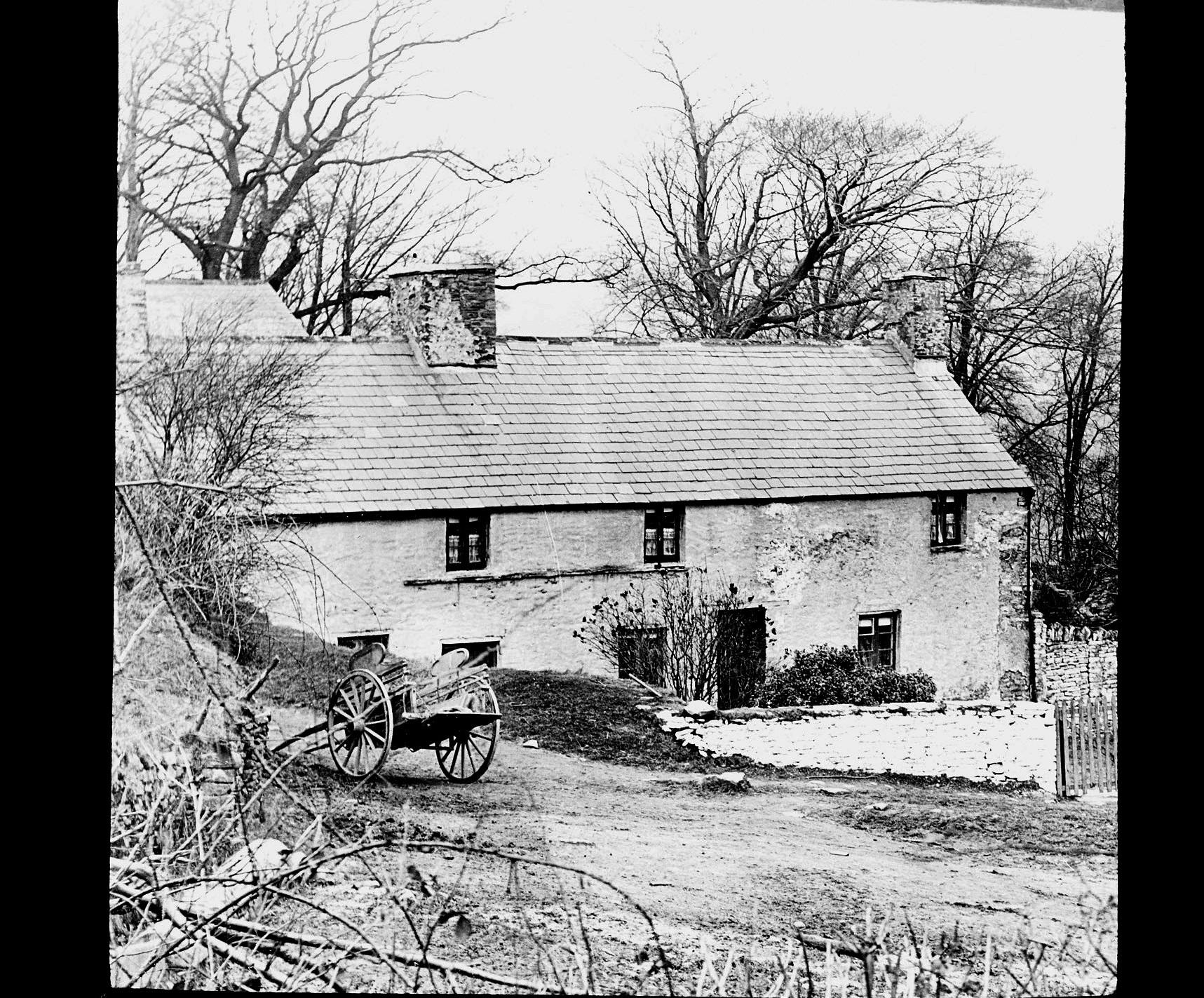 In stark contrast to Ann and Will, John and Martha Llewellin were much luckier in love. Owners of Scollock West Farm in Woodstock, Pembrokeshire, the couple lived together happily until they were separated by the death of Martha in 1906.

Following Martha’s death, Italian sculptors used one of the couple’s wedding photos to create a life-size, white Carrara marble statue of her — erected as part of a monument overlooking the couple’s farmhouse.

Following his passing in 1918, a statue of John was also created to stand alongside Martha’s — with husband and wife buried together in front of the monument.

The inscription on the monument reads: 'By the blessing of God on their joint industry and thrift they bought this farm and hand it down without encumbrance to their heirs. Endeavour to pull together as they did. Union is strength.’

Recognised as a Grade II listed building by Cadw in: November 2000 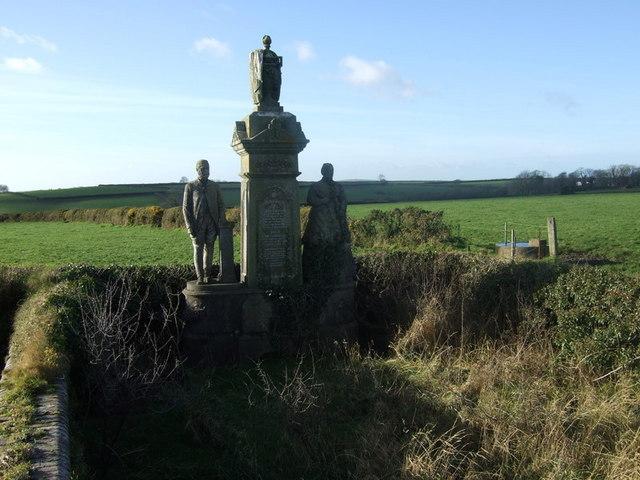 To discover more of Wales’s impressive catalogue of listed buildings, explore Cof Cymru — Cadw’s record of information about the historic assets of Wales.