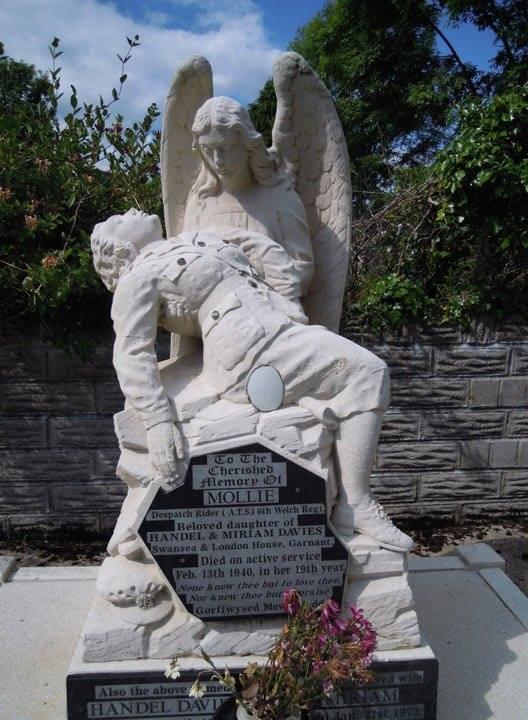 Born in the Welsh mining village of Garnant, Carmarthenshire, the young nineteen-year-old with a passion for motorsports was the first ATS servicewoman to lose her life during the Second World War — yet her story has seldom been told.

Telling Mollie’s story is all part of Cadw’s continued effort to unearth and celebrate the stories of women from Wales’s past — a mission which was started with the release of its first feminist history book for children last year, Welsh Women Making History.

Having bravely left home to join the 67th (Welch) Searchlight Regiment in Cardiff in 1939, Davies caught pneumonia while on duty and died in 1940 — just months before her twentieth birthday.

While on service, Mollie was responsible for relaying information between searchlight batteries and officers in the event of an air raid in the Cardiff area.

Today, a 6-foot, Grade II-listed sculpture stands at Christ Church in Garnant, to commemorate Davies’s memory and celebrate her dedication to Britain during World War 2.

Commissioned by her mother and father, Handel and Miriam Davies, the monument was listed by Cadw in January 1998. It is recognised as an unusual sculptural depiction of a romanticised female in military uniform — a manner usually reserved for male military casualties — making it a rare, physical illustration of the active role of woman in 20th-century warfare.

“My Grandfather, Freddy, knew Mollie as the best friend of his sister and my late aunt, Betty. He would often tell me stories about Aunt Betty and Mollie as young girls — they practically lived in each other’s pockets.

“Given the furthest they had every travelled before the war was Swansea and Carmarthen, Mollie’s move to Cardiff to join the ATS and 67th (Welch) Searchlight Regiment must have felt like the start of a great adventure, to serve her country.

“Her family had a love and passion for motorsports, which likely stemmed from her father, Handel, an affluent mechanic who previously served on the Western Front before taking up racing at the Welsh TT Races at Pendine and later becoming President of Swansea Motor Club.

“Therefore, it is believed that Mollie acquired her handling skills from her parents, which helped her quickly qualify as a female despatch rider at a time when such skills were in high demand.”

With a family interest in the life of Ms Davies, Victoria’s brother and military historian, Jonathan Ware, has shared his thoughts on her legacy and why he feels it deserves to be more prominent in Welsh history books:

"Women from across Wales played a remarkable role in the Second World War. It is wonderful that Cadw is championing Mollie Davies's story, helping to shine a spotlight on this oft-muted area, as their astonishing history gently slumbers in every village, town and city — ripe for rediscovery by a new generation.

“It's an undeniable tragedy that such a bright character passed away so young, clearly leaving a void for my great aunt Betty. However, Mollie's life highlights the courage, determination, self-sacrifice and can-do attitude repeatedly demonstrated by the Auxiliary Territorial Service's pioneering members, despite extreme adversity.

“Such an astounding romantic memorial is a humbling testament to a family's love for a daughter untimely lost — helping to grant Mollie an enduring legacy and pay homage to the ATS's 190,000 servicewomen."

“What better occasion than International Women’s Day to share the untold story of such an inspiring young woman.

“We’re always interested to hear from members of the public regarding personal interests or links to our listed monuments, and encourage anyone to come forward with further anecdotes about Mollie Davies — or other prominent women from Welsh history. In doing so, we can hope to further commemorate the memory of Ms Davies and celebrate other unsung heroes from the history of Wales.”