This monument is open to visit.

Pre-book your tickets online in advance to guarantee entry and please remember:

Norman stronghold is a match for the greatest castles of Wales

See Kidwelly Castle rising above the river Gwendraeth on a misty morning and prepare to be amazed. This is the medieval fortress of everyone’s dreams.

That’s probably why it appears in the very first scene of ‘Monty Python and the Holy Grail’. But it would have been no laughing matter to attack this military stronghold.

Kidwelly began in the early 12th century as a Norman ‘ringwork’ castle made of wood and protected only by an earthen bank and ditch. Not surprisingly it was under constant attack by Welsh princes including the Lord Rhys, who captured it in 1159.

Four decades later the Normans were back in charge. By the 1280s the Chaworth brothers, powerful Marcher lords, had created the stone ‘castle within a castle’ that still stands today.

Imagine being a Welsh attacker. First you had to conquer the great gatehouse with its drawbridge and portcullis, a hail of arrows and rocks raining down on you. Breach these outer defences and you were faced by the four towers of the inner ward. No way forward – and nowhere to hide. A true killing zone.

After centuries of see-sawing conflict between Norman invaders and native princes Kidwelly was now a match for any castle in Wales. The gatehouse added by the Duchy of Lancaster was the icing on the cake. Even the forces of Owain Glyndŵr couldn’t break through. 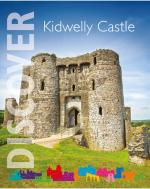 Buy your Kidwelly Castle guidebook here before you visit.

Accessible toilets available at this site for visitor use.

There is a large free parking area a short walk from the monument with 1 dedicated disabled space.

There is an incline to main entrance. Access is on a wide concrete path with a non slip surface, which leads on to a wooden slatted bridge.

There is wheelchair/buggy access in visitor centre and the monument.

Access to upper levels of monument is limited to walkers.